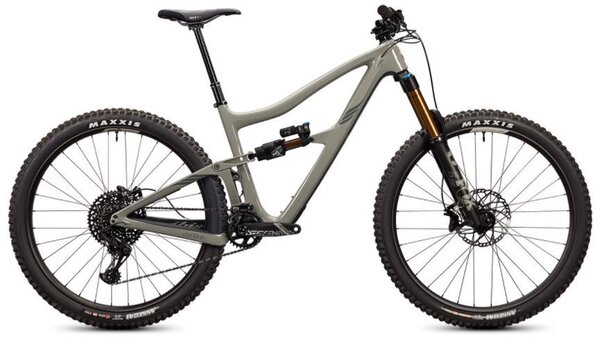 This item is currently not available.

If you wondered when the carbon Ripmo would get AF’d, well, you can stop wondering, the NEW Ripmo V2 is here. We’ve made it a full degree slacker, a little bit longer, stiffer, and added progressivity for coil compatibility.

Just like the original, our newest Ripmo was developed under the demands of competition. Robin Wallner rode a disguised Ripmo V2 to four top-ten finishes during the 2019 EWS season.

To start, we gave the V2 a more progressive end rate
with more ramp up, which eliminates bottom-out
worries for hard-chargers. And that opens the door
for a coil shock. And the initial leverage ratio is now
a little higher for improved small bump performance,
eliminating trail chatter.

But life isn’t just a magic carpet ride of epic descents.
To go down, you have to go up. The original Ripmo was just as lauded for climbing as it was for floating above tech. The V2 maintains the Ripmo’s reputation for uncanny climbing capabilities. Climb a Ripmo V2 and
a Ripmo back to back and you won’t notice a difference.

Downhill is another matter. We went one-degree slacker for the head angle, kept the stack height the same, and added just a few millimeters of reach to round things off (471 to 475mm on a size L). We tested this geometry with the Ripmo AF and it’s been universally lauded—nothing holds you back descending (rock rolls, drops, root gnarls) but you’re not piloting a dump truck climbing singletrack switchbacks. It shreds and climbs.

Since we increased the Ripmo V2’s capability, we thought it only wise to beef up its protection. It’s a beautiful carbon frame, might as well keep it that way. We’ve added linkage guards that protect the upper and lower linkages from contamination, while covertly hiding between the front and rear triangles.
And despite all the AF updates to the Ripmo V2, we kept its weight to a svelte 6.25 lbs. for a size medium with Fox DPX2. With completes starting at 28 lbs, the Ripmo is just as much the all-day climber it’s been, just with more snarl and menace on the descent.

With the Ripmo V2, you have the very best Ripmo we can make. It incorporates the geometry we perfected on the Ripmo AF. It fits 29 x 2.6” tires, a full-size water bottle, cloudlike climbability, and it has a progressive end stroke for coil-shock compatibility. It touts our 7-year frame warranty and lifetime warranty on IGUS bushings. And most importantly, it won’t hold you back. On anything. And yep, it’s available now.